Descendents of some of Plainfield’s earliest residents attended an unveiling of the new Tamarack Settlement Park sign April 23. The park, formerly known as Northwest Community Park, was officially renamed in 2021 in honor of the Scottish settlement that was founded nearby in 1845.

Below is a history of the settlement and park property provided by Tina Beaird, local historian and owner of Tamarack Genealogy.

Stephen Findlay, who hailed from Louden Scotland, a town in Ayrshire Scotland, and family arrived at Wheatland Township in the spring of 1845. Stephen applied for a land patent from the Federal Government in 1846 to purchase most of Section 30 in Wheatland Township. He began purchasing more and more land in surrounding township sections in both Will and Kendall counties and rented this farmland to kin who were following a classic chain migration pattern to the area. At its height, Tamarack settlement stretched from roughly 111th Street (Rance Road) to the north, 135th Street (Pilcher Road) to the south, Roth Road (Oswego Township) to the west and 248th Street to the east. Dozens of families called Tamarack home including the Harvey, McMicken, Rance, King, Campbell, Gray, Thomson, Stewart, Anderson, Gilmour, Brown and Burnet families to name just a few.

The settlement, colloquially known as the Scotch Settlement, changed its name to Tamarack in 1852 when Thomas Burnet (brother-in-law to Stephen and Sybilla Findlay) arrived from Thomasville, CT via the Great Lakes to Wheatland. While stopped in Detroit, he purchased four Tamarack trees and planted them along the road leading to the settlement on 127th Street. The last of the original Tamarack trees was removed in October 2016 when 127th Street was widened.

The Wheatland Presbyterian congregation was founded by the Findlays in 1848 with the Rev. Oburn officiating. The congregation met in the Findlay home on Heggs Road for several years until they outgrew the space. The congregation temporarily held worship in an abandoned schoolhouse and the first church was built in 1856 at the site of the current church. The current church was erected in 1906 and descendants of many of the founders still attend worship. The church cemetery is the final resting place of many of these families.

Tamarack School opened in October 1868 at the southeast corner of Heggs and 127th (where Shenandoah Subdivision now sits) on land owned by John Brown. The school was open until Will County consolidated schools between 1948-1950. Tamarack, in fact, was one of the last one-room schools to close its doors. Eventually the vacant school was sold to James Findlay for his son and new daughter-in-law and was moved 1/2 mile south on Heggs Road. The school still exists and is currently a private residence.

The last remaining physical structure on the site of the original Tamarack settlement is the red house at the northwest corner of Heggs and 127th Street. It was the Tamarack Post Office and general store. The structure(s) date to 1850-1852. A cabin owned by James and Barbara Sime was moved to that corner and merged with another cabin to accommodate the Andrew Malcolm family. A post office is documented on that corner in 1872 and was the official post office of Tamarack until 1898.

In the past decade the last remaining farmhouses on the McMicken farmstead (dating to early 1870s) and King Farmstead, (main home built in 1852 and farm-hand home built circa 1870) directly north of the park, had been given to the Plainfield Fire Department for controlled burns. The land on the northeast corner (no current structures) was sold for development for the forthcoming Ballard Farm subdivision.

The land where Northwest Community Park sits is split between the James Chaplin farm and the Walter Gray farm. Walter purchased the land from William Fitch some time in 1856 as it shows up in the 1857 Wheatland Township Tax Assessment book. Walter Gray purchased additional land from William Fitch and James McClelland between 1857-1860, considerably expanding his farm. Generations of Grays were raised on the land. The Grays were active in the Wheatland Presbyterian Church, Walter Gray was a charter member and trustee. Several family members are buried in the Wheatland Presbyterian Church Cemetery. The Gray farmstead was passed down to his son, John, and John later sold it to the Eugene Tuttle, who had been renting the property. The Tuttles, while not one of the Scottish settlers, did intermarry with families from the Tamarack Settlement including Findlay and King descendants. Many Tuttle children attended the Tamarack School and John Tuttle taught school there from 1896-1899. They were very much a part of the community at Tamarack.

Mabel King married Eugene Tuttle in 1913. Eugene had been renting the Gray farm for several years before he and Mabel wed. They eventually purchased the farm from John Gray’s son Andrew circa 1927. The Tuttle family sold the land to MAF in 2001 for the Shenandoah development. Her farmhouse was demolished in the 1990s.

James Chaplin, a native of England, arrived at Tamarack circa 1860. He married Marion Wilson in 1863 they had several children, James Russell, John, Eli and William. The latter, William, inherited his father’s farm after his death in 1889. The other sons purchased nearby farms. Upon William’s death, the farm passed to his son George Chaplin and then to Harry J. Chaplin and family. James Chaplin’s heirs sold the farmstead to developers in the early 2000s.

Like the Tuttle, they attended Tamarack and were involved in the local threshing ring and other community events. Several Chaplins are buried in the Wheatland Presbyterian Church Cemetery. They married into the surrounding farm families as well. Many descendants still live in Plainfield. James Russell Chaplin’s daughter Lois married Jay Culver, from a nearby farm family. Lois was a news correspondent to the Plainfield Enterprise and other local papers from the 1950s through the 1970s. Their children Maryann Mather and James Culver (deceased) still own the Chaplin farmstead (yellow house) at the corner of 127th Street and Route 30. 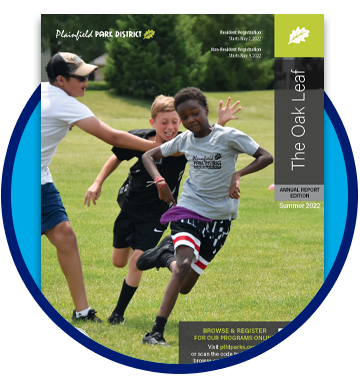